Significant works for Instruments and Electronics

Commissioned by Louise Devenish and Erin Coates, and was funded through a Department of Local Government, Sport and Cultural Industries grant. The work premieres at the Perth Festival in 2021.

For Solo Mixed Percussion and Electronics
The work Alluvial Gold is a solo work for a mix of percussion, sculptures as instruments, installation, and electronics. The work explores the confluence of multiple narratives about the Swan River, from the phenomenological and structural aspects of river systems and water, the storytelling and histories before European colonisation, the devastating impact of industrialisation, the sonic ecology and chemistry of the larger river system, and a musical language derived from transcriptions of water and the sculptures used. In the work, the river forms a temporal narrative through a changing sound world and aesthetic, an expression of the composers' own sense of belonging to place, and the Sacred identity of Derbarl Yerrigan. The basis of this work is thanks to a longer term collaborative project with Melbourne-based percussionist Louise Devenish and Perth-based visual artist Erin Coates.

The work is comprised of nine movements, and whilst these movements were conceived to be presented as one continuous performance without a break totalling approximately 45 minutes, each movement was written in such a way that they could alternatively be presented individually.
The nine movements are as follows:

For Flute, Bass Clarinet, Viola, Cello, Chaotic Oscillator and Circuit Bent Toy
The work isn’t intended to be a direct commentary on the Coronavirus pandemic, but is not intended to be ambivalent either. This work is concerned with the counterpoise that balances life on the planet as we know it, and human civilisation from engaging in civil or world war. The Global impact of COVID-19 has made it apparent the very tenuous balance that human mortality resides, between human vulnerability and resilience. Chaotic systems exhibit this kind of volatility, and like a tensile system, there is a boundary at which the system falls into catastrophe. Human kind is quick to respond worldwide to the deterioration of these systems, but never so much before has the world has been challenged by the “age of disinformation”.

The score is an animated graphic score using the Decibel Scoreplayer, and uses the apps canvas draw mode.

For Laptop Soloist, Sextet (3 acoustic duos), Fixed Media and Live Electronics (stereo), and Live Generated Visuals
​
Noise in the Clouds is a laptop concerto written for laptop soloist, visual projection, sextet ensemble, and live electronics. Whilst the concerto form has been understood for hundreds of years as a work for soloist and ensemble, the writing of concertos specifically for laptop soloists has only emerged within the last few years, and therefore this combination is free of the constraints of other established instrumentations. The work explores chaotic phenomena of varying types: chaotic audio oscillators, chaotic phenomena as found in nature, and the process of iteration as a visual narrative. These expressions became a mechanism or structure for generating the sound universe, musical structure, the compositional process, the visualisation, and the notated score. The laptop soloist performs an instrument developed by the composer which derives all of its sounds from chaotic 'strange attractors' that are expressively controlled by the soloist by the 3D movements of the hands. This instrument expands on a 2D multi-node timbre morphology interface developed by the composer, applying this instead to modulating the generative parameters of chaotic audio oscillators.

The work explores elements that are recalled through visual memory versus material that is learned through muscle memory and repetition. The score asks players to recall passages that explore the same geographical/physical shapes from memory before recalling passages performed previously within the work from memory with visual cues and clues. Some sections of the work explore new materials, whilst distracting other performers from remembering sections they had performed previously.

​For Reyong and Bonang Gamelan and Electronics (stereo)
"Now these semi-abstract gestures are suddenly traded for a 4/4 emphasis and a tonal centre (it seems to be a minor key), see-sawing chimes forming a suspenseful ostinato that won’t let up. At this moment I discern traces of techno, of ambient electronica and Steve Reich, whether or not these evocations are intended or welcomed. ...Ultimately the piece consists of countless minimalist melodies rendered with a range of inflections, overlapping, repeating, jostling. The piece is said to reflect upon the sun, the moon, the tides, nature, breathing, life, death… but before I’ve been told this, I get some unarticulated sense of it. There’s something reverent and deep and pensive happening." Lyndon Blue (Cool Perth Nights, 2015)

The essence of energy consists of the cycles of life and death. The sun, the moon, the tides, the planets, the seasons, the oscillation of wings. The essence of human life is the breath, the compression and rarefaction of the lungs. The essence of sound is the compression and rarefaction of kinetic energy passing through air. The work Kinabuhi | Kamatayon is both a celebration of life and death, and is itself concerned with the compression and rarefaction of time. The work is divided into five movements, and progressively transitions from a compression and rarefaction across an entire movement to transitions between consecutive bars in movements 1 and 5 respectively. The work explores different time scales, sometimes in parallel or in series.
Ensuring the tempo ratio's are synchronised to the sample for Movement 4 of 'Kinabuhi | Kamatayon' for Reyong and Bonang Gamelan, and Electronics (commission from percussionist Louise Devenish). The nested tempo ratio's are supposed to reveal a fractal-like structure of different tempo specific materials by iterating the same metric modulation (tempo ratio). All rhythmic groups are odd causing consistently overlapping rhythms.

Timbre shaping and multiple tempo canons in Movement 2 of 'Kinabuhi | Kamatayon' for Reyong and Bonang Gamelan, and Electronics (commission from percussionist Louise Devenish) 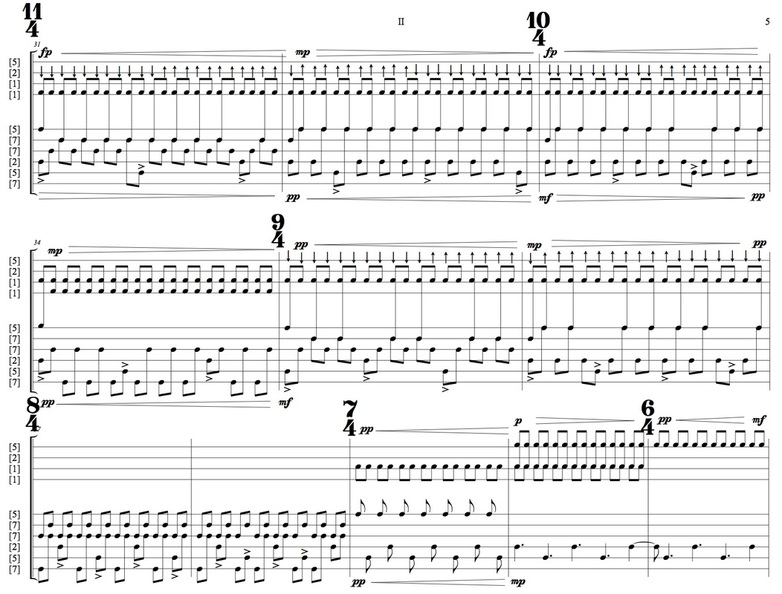 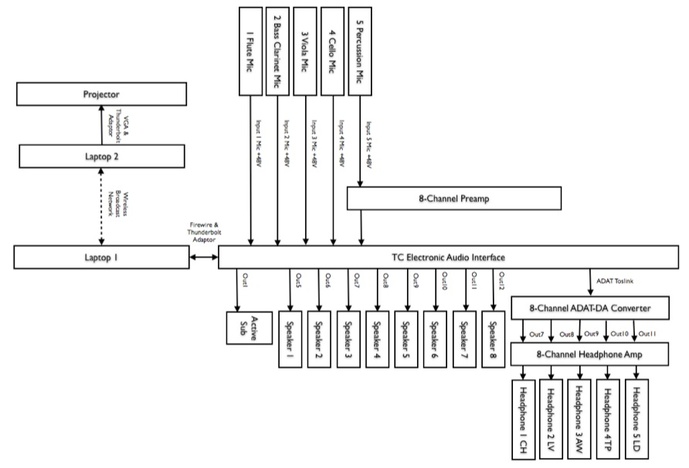 For 2 ruined cymbals and live electronics (quadraphonic)
​The technical setup on stage involves two microphones and two ruined cymbals, as well as the live processing rig (laptop and audio interface), and a quadraphonic speaker configuration and subwoofer placed around the audience.
The technical setup involves a specific microphone of choice, the Earthworks TC25 condenser. There are a number of reasons for this. The first is the polar pattern. Omnidirectional microphones are often used for measurement and room analysis purposes due to their linear frequency response. The frequency response is also characteristically much more extended than other condenser microphones having a range of 9 Hz to 25 KHz meaning that the microphone is largely linear within the range of human auditory hearing. The dips in the frequency response only exist at the extremities of the microphone’s own frequency response below 20 Hz and towards 20 KHz.
The microphone is also physically quite compact, most particularly the capsule. It is characteristic of pencil condensers to have a smaller capsule size, but the Earthworks microphone has an uncharacteristically small diaphragm. This allowed the microphones to be placed very close to the source, and not suffer from the proximity effect, resulting in timbral differences due to close proximity with the source as is experienced with directional microphones.
One of the Earthworks TC25s is placed parallel to a ruined china cymbal. From this position an 18-inch ruined crash cymbal is situated so that its edge also meets perpendicular to the microphone’s capsule. This allows the one microphone to pick up the fundamental pitch of both cymbals. A second TC25 is used as an overhead situated perpendicular to the china cymbal. This second microphone is responsible for picking up detail of the various soft mallets and brushes used to strike the cymbals in the piece.
The starting point of this piece was to find a sound object that had a broad spectral content, as Barreiro (2010) claimed that these kinds of sounds were more suitable for spectral spatialisation and resulted in more diffused and enveloping sound shapes. The cymbal was amplified through the PA speaker in order to reproduce its fundamental frequency. The work evolved by initially working with the acoustic feedback and modulating the live microphone signal to control the nature of the way in which this feedback evolved. As the work progressed the processing shifted not only to sampling and spectrally processing the sound of the cymbals, but also focusing on the nature of the spatialisation applied.
This work depends on sound sources to initiate a chain of events. In this sense the work is reactive, and the sounds made on the cymbals, using either soft mallets or brushes, excite the system into feedback. In this way, the cymbals, the microphones, the loudspeakers and the room are all part of this instrument.
Acoustic feedback was tempered by consistently pitch shifting and ring modulating the sound source. The spatialisation also served to destabilise resulting feedback by introducing time delays and level differences in relation to the microphones. A significant level of granulation and spectral processing allowed for the sound source to be sufficiently ‘abstracted’ that there was no risk of further feedback.
This thorough testing process was critical for the software design. The first performance of this work was in a pub venue, The Velvet Lounge at Mt Lawley, with a ceiling-mounted PA system and a very small stage. Due to the close proximity of the PA system to the performance stage, the risk of unwanted feedback was considerable. This was perhaps the most volatile of conditions under which to test such a subtle and condition-dependent work; however the extensive testing proved to have aided in maintaining a controlled performance. The following performance with ensemble Decibel at PICA was considerably more polished, involving a quadraphonic speaker configuration instead of the two-speaker PA system at the Velvet Room. 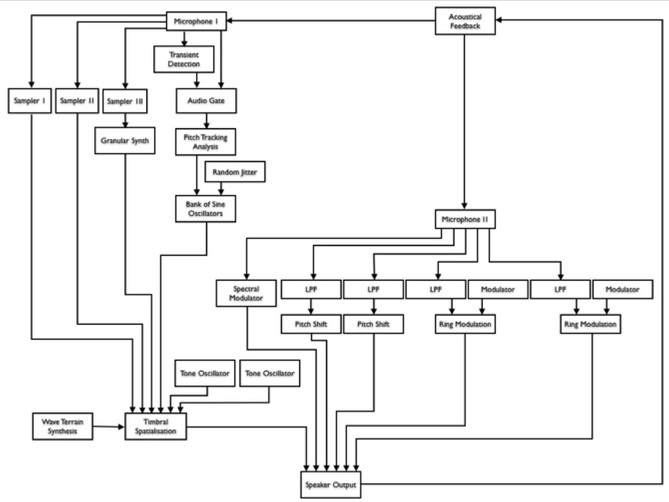 The sound synthesis in this work explores a number of treatments of the cymbal sound source from live sampling and granulation, to ring modulation, pitch shifting, sine tone resynthesis and a vocoder-like spectral processing that is also used to excite the acoustical space, invoking momentary feedback through the system. A schematic of the signal process and flow is shown in the diagram above.
In this early timbre spatialisation experiment there was as much curiosity about the possible resulting sound shapes that could be generated as there was about the implementation itself. This was due to the early and experimental nature of the mapping strategy used.
The work itself did not explore any means of physically performing the diffusion in real time, relying instead on an automated system that was driven by LFO. This allowed the electronics performer to focus on the timbral qualities of the sounds themselves and the sound-generating means, rather than specifically controlling the nature of the way in which the diffusion evolves.
The trajectory used was linear, passing over a stochastically generated polar terrain surface. The trajectory sweeps in one direction, as dictated by the low-frequency oscillator (LFO), before swinging back in the opposite direction et cetera. The only control by the performer is the speed of this LFO. In the work this oscillation starts at 0.02 Hz. This can be heard in Section A of the work with the processed sound of the brushes over the china cymbal creating low-frequency spatial texture as the sounds shift slowly over the quadraphonic speaker array. The speed of this LFO is increased to over 10 Hz in Section B when the crash cymbal triggers off a bank of sine tones. These sine tones are processed with timbre spatialisation creating a movement that is between low- and high-frequency spatial texture. It is on the cusp of being perceived as a fused image but the micro-morphologies are still evident, creating a fast, shimmering effect across the listener area. This faster movement tended to coalesce in a more immersive and enveloping spatial distribution.
Powered by