Compositions and Creative Collaborations 2012 [under construction] 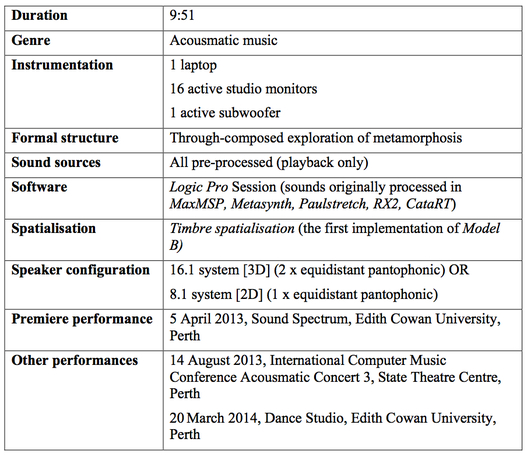 While in residency at the SpADE facility at DMARC, University of Limerick, my focus shifted towards applying timbre spatialisation from found sounds to environmental noises rich in harmonic content. These proved to be effective when diffused across a multichannel system. The exploration of different trajectories had led to me discovering the immersive effects of high-frequency spatial texture by using a range of asynchronous and noisy trajectories for timbre spatialisation. The immersive effects reminded me of natural environments and ecologies where the source of sounds appear to be coming from many different directions around the listener, with no clear localised point of directivity.
This experience in Ireland led to Veden Ja Tulen Elementit (2012) (the elements of water and fire), an acousmatic work that explores several different approaches to spatialisation practice. The composition began largely as an experiment in sound design, in virtual immersive environments and spaces. It was inspired by the listening modes discussed by Pierre Schaeffer (1977), Michel Chion (1983), Barry Truax, Katherine Norman (1996), David Huron (2002), and Smalley (2007). This piece, like other acousmatic music, encourages what Schaeffer (1977) describes as the reduced listening mode, exploring various kinds of immersive sound shapes generated through timbre spatialisation.
The work was presented at the 2013 ICMC.
Two environmental source sounds were used: a rippling river and burning embers. The premise of the work was to begin with the sound of the babbling brook, spatialising this immersively as to encourage a referential listening mode. With an interest in realism and hyper-realism, the opening is intentionally aimed at creating a  real sense of place. However, the piece is not intended to be a soundscape, and as I have an interest in the surreal, very quickly this familiar environment begins to distort into the unfamiliar. As a composer, I cannot say I was interested so much in what these sounds represented for the listener, but in taking the listener from the familiar, and gradually and increasingly towards an unfamiliar sound world. The opening sound sample is processed in accumulating and more abstracted ways, gradually shifting this sound away from its original associated references. The piece concludes when increasingly processed water samples finally undergo a metamorphosis into the samples of the burning embers.
This work related to a concept of the phantasmagorical written about by Curtis Roads (1996) with respect to physical modelling synthesis. Some physical models can extend real-world possibilities to dimensions of the absurd: for example, a musical instrument that involves plucking the cable wires of the Golden Gate Bridge in San Francisco. In the real world these are reaching impractical possibilities; however in the algorithmic world we are not bound by these constraints. Similarly in sound spatialisation, we have spatial movements that would be impossible in the natural world, and rather than avoid them, we can explore these as further possibilities of expression above and beyond what is possible given what is possible in the physical world.
The work was conceived on the SpADE speaker configuration shown below, so was written with the elevation of sounds in mind. As this was implemented before 3D timbre spatialisation was possible, the work focuses on the use of two different circular systems: a lower and upper array of speakers. 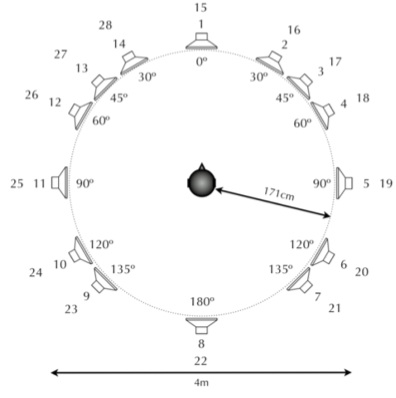 The rendered work consists of a series of audio stems, shown in the following table, are mapped to specific designated speaker channels at SpADE.

A collaboration with Australian visual artist Erin Coates
Powered by