Compositions and Creative Collaborations 1993 - 1999 [under construction] 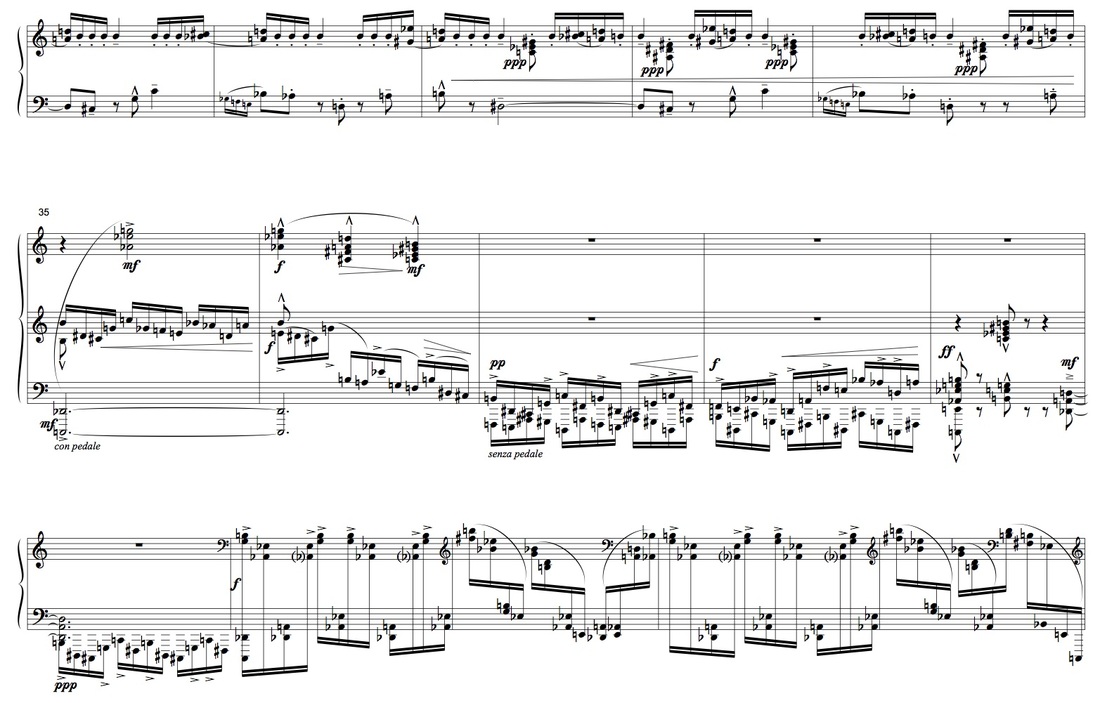 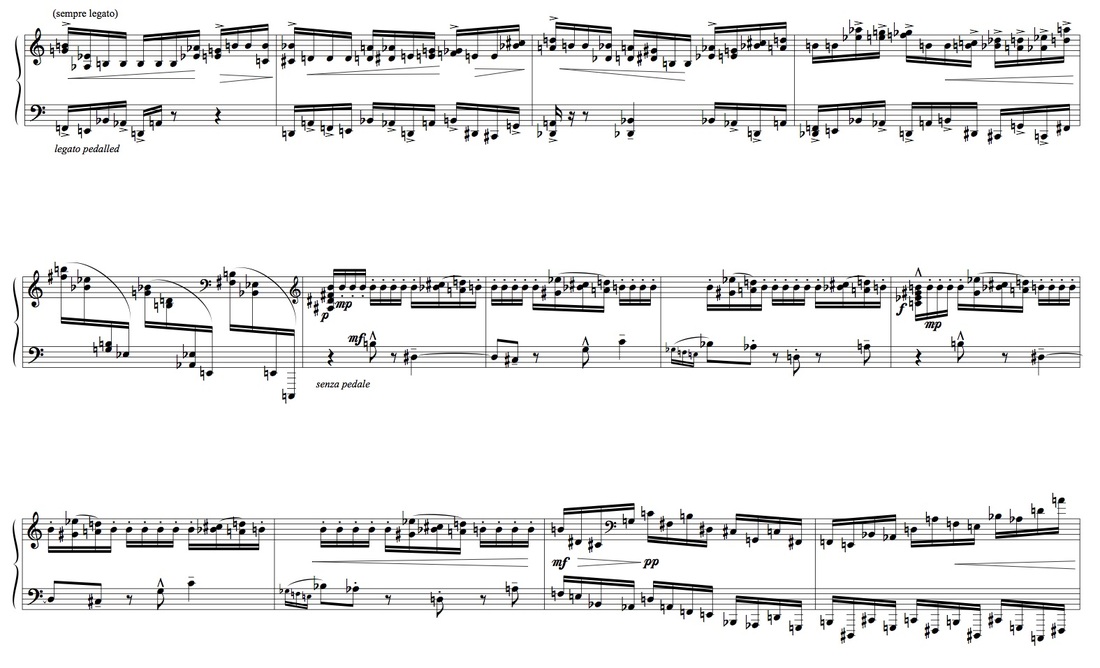 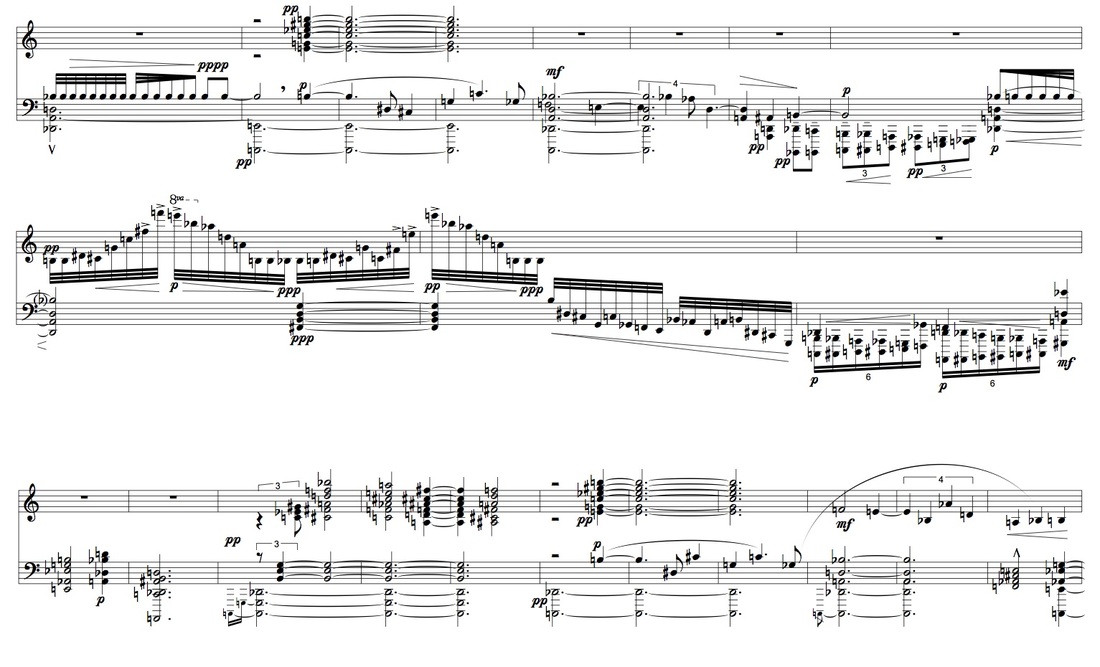 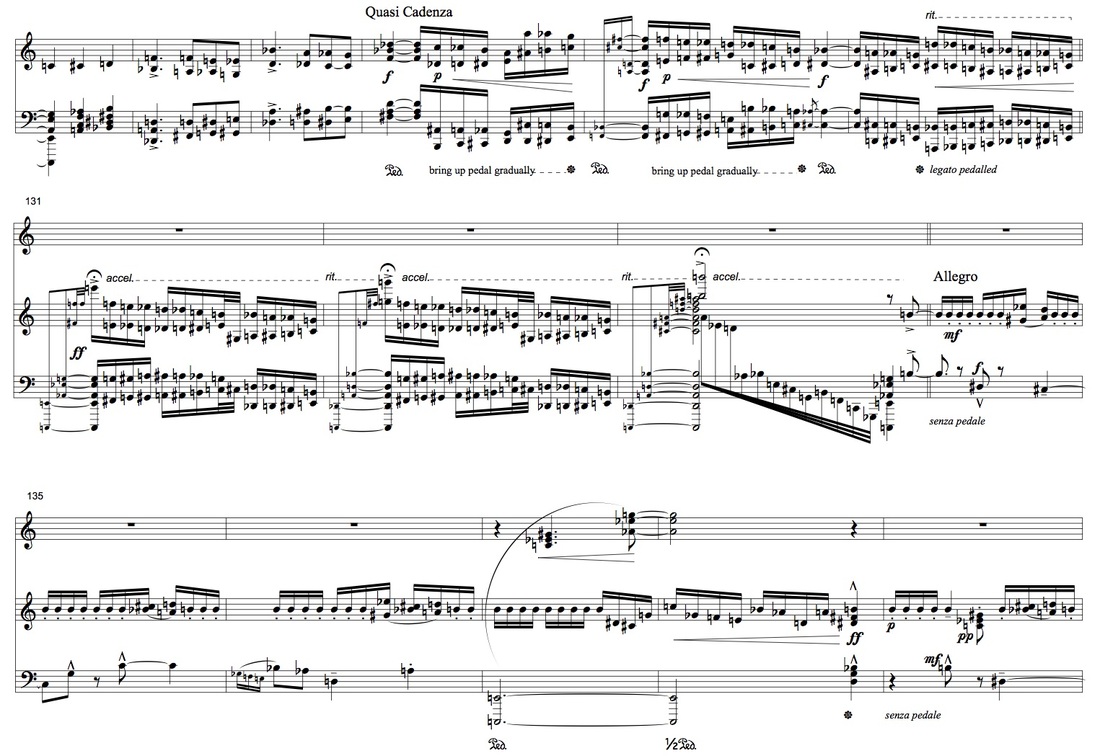 
The set is comprised of seven contrasting short pieces restricted to a page in length. They each demonstrate a different musical style or compositional technique, and therefore must be interpreted and subsequently performed differently by the performer.

Each phrase must be performed like plain chant might be sung, with a slight stylistic swell, an accelerando toward the peak of the phrase, and a ritardando and diminuendo toward the end of the phrase. With this in mind, the phrase can start quite slow, and also end similarly with a relatively exaggerated ritardando. Obviously the piano, as an instrument, is far from the characteristic sound of the human voice. However, if the phrases are legato pedalled and played with minimum attack, a desired performance can be achieved. Keep in mind to also play off the acoustics (resonance) of the venue. The two phrases in the piece are written in differing registers of the piano for antiphonal effect. Both phrases must be played with equal priority, as opposed to call (leader) and responce (group). Try to find recordings of any form of "chant" (Byzantine, Gregorian, Old-Roman etc...) to obtain a clearer idea of how to interpret this piece. This piece is based on duple organum (which I have extended to five voices) as opposed to a "single line" chant melody.

Dynamics, articulation, and melodic nuance are the absolute key for the effectiveness of this piece. The piece must be performed with a certain level of conviction. To enhance this it is possible to exaggerate the rhythmic character of the piece (ie. if there are dotted rhythms, play them slightly more dotted). Play on this, until you feel that it enhances this sense of conviction (they need only be very slight). The melody is to be performed generally legato throughout. When there IS a legato marking it is to be exaggerated by heavily emphasizing the first note, as apposed to the second. The instruction 'with ever increasing tension' can be achieved with an exaggeration of dynamics, and the performer can 'lean' into certain notes when there is a larger dynamic marked. The tempo can also become progressively faster during the piece to heighten the sense of 'increasing tension'. Despite the fact that I am allowing so many elements to be exaggerated, they must still have a sense of controlled conviction. Exaggerated does not give the performer free license. In fact, quite the contrary. The contrasts, particularly in dynamic, must be accurate. The "Dying Away" section should be self-explanatory.

This piece demonstrates a fragmented and very chromatic polyphonic style. It is probably most concerned with elements of German high romantic and post-romantic composers (Wagner, Schoenberg) from the about the middle of the 19th century to the early 20th century. From this time frame, the piece fits the mould of the "expressionist" vein in terms of its free atonality demonstrating the notion of "emancipation of dissonance", although I wouldn't call the piece expressionist in its structured and considered form. There are tonal elements in the piece, mostly distinguished by the continual occurrence of voice leading and the resolution of "non-consonant" intervals. However, there is, no doubt, a precedence for dissonance, mostly for "expressive" effect throughout the piece. It is essential that, in performance, each polyphonic layer is played independently from each another, bringing their individual melodic characteristics out to the foreground. Listen to late romantic German music from Wagner (particularly Tristan und Isolde), Richard Strauss, Max Reger, Gustav Mahler, Arnold Schoenberg, and Alban Berg (particularly Wozzeck).

For a successful performance, the piece must be performed by retaining a smooth and flowing melodic line, with no breaks or hesitations. Slight accelerando's and deccelerando's are desirable, but should be used subtly. It is mostly recommended that these devices are used to dramatise the harmonic flow of the piece, either accelerating into harmonic pivots for dramatic effect, or softening these changes through decceleration. The accented notes within the line form another melody, which should be "played out" as a seperated voice, and similarly for the bass melodic line. Ontop of projecting this line, the accented melody can be performed in a physically distinct way, resulting in a different timbral quality, helping to separate the melodies from the overall texture. Also keep in mind, the sustain of the melody must be significant enough to allow the melodic phrase to sound like its own connected line. Because of the 19th century "sound" to this piece, I have decided that it is most effectively performed in the "romantic" "Lisztian" manner. Despite this, however, the piece has a considerably more modern underlying formal scheme to its composition.

This piece is based on Morton Feldman's latter music. The most important aspect of the performance of this music is to take in the experience of each sonority individually. In this lies the key to finding the meaning in this music. These general performance rules should be taken into account:
Remember that each chord does not have to be equal to the next. The fact that they are each notated as semibreves should not account for their actual duration. Their real duration should be executed through the performers consideration of the rules above. Be sure to listen to some of Morton Feldman's music to have a clearer idea of the interpretation.

This piece would have to be the hardest to find a convincing interpretation for. There are certain general aspects of performance that should be kept in mind. Firstly, much of this piece must be performed half pedalled, so that the initial chords are held right through for their duration. Secondly, dynamically some of the melodic material may be found to be quite veiled by the initial loud chords. If so, they may have to be marked up a dynamic (a little, and only if absolutely necessary). One main problematic aspect in the performance of this piece can be the tempo. Performers generally rush this piece far too much. Preferably, it must be steady and rhythmically solid. Once the tempo is steady, the melodic lines can be characterized a little more. This will aid the performance by providing conviction and energy. I would mostly suggest to listen to Olivier Messiaen's music for this piece, most particularly his piano works. The element of "dark humour" is a further musical influence and response to Harrison Birtwistles opera Punch and Judy. 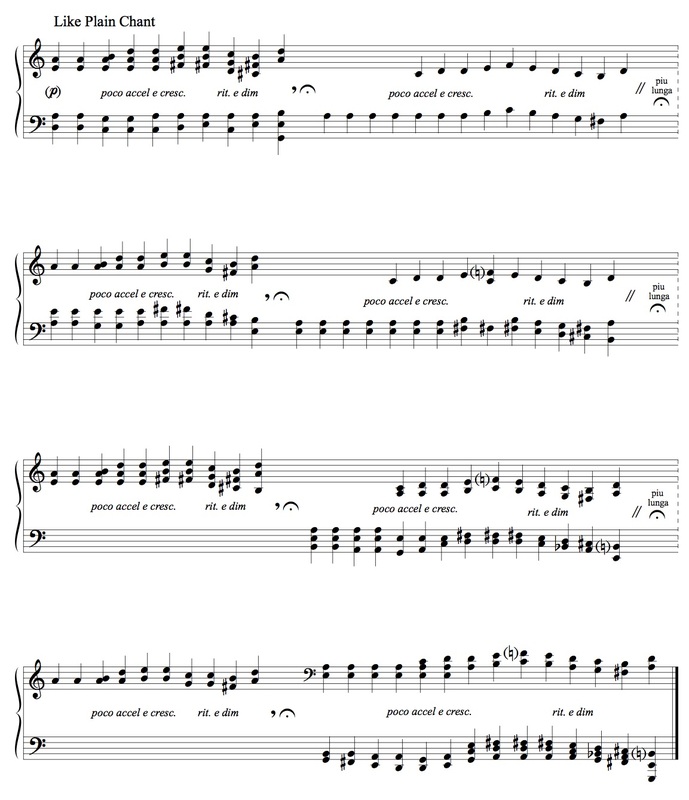 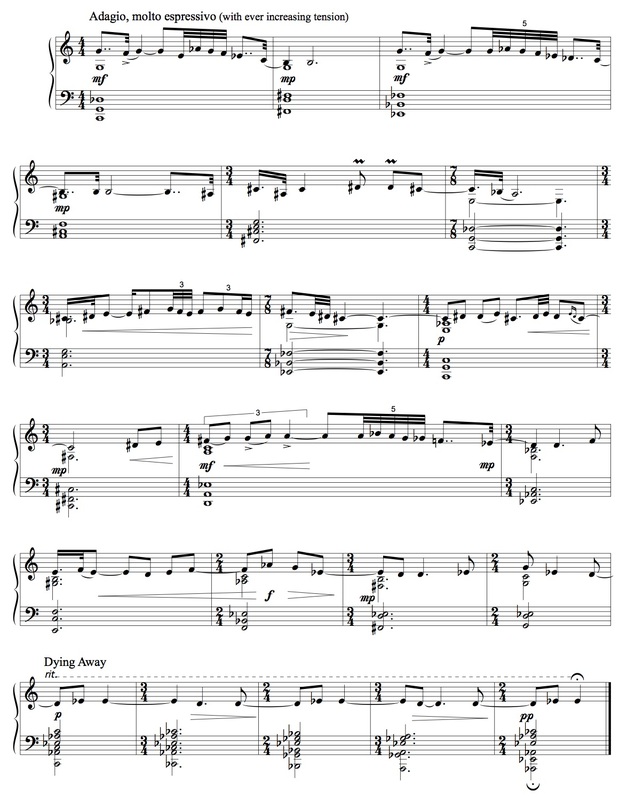 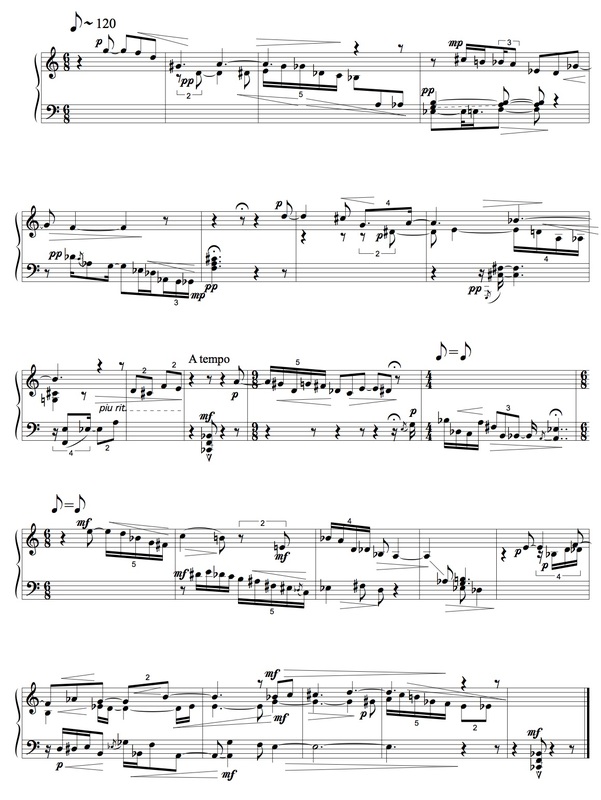 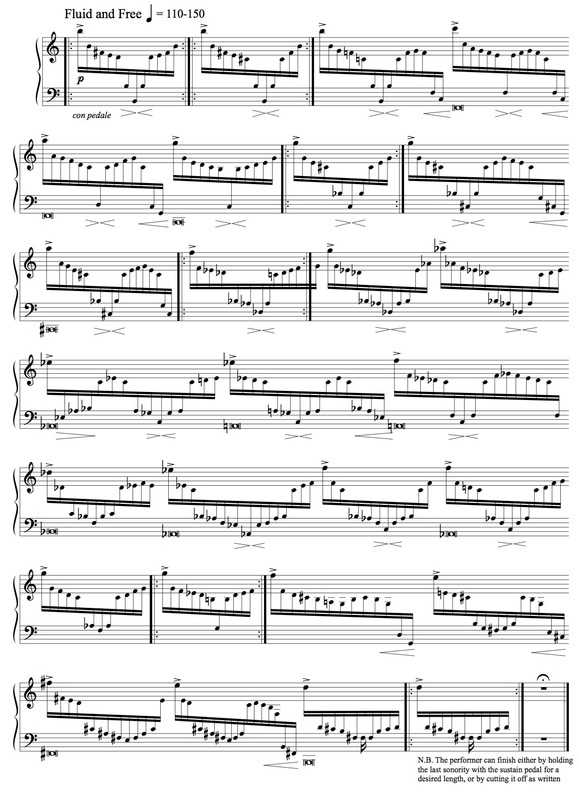 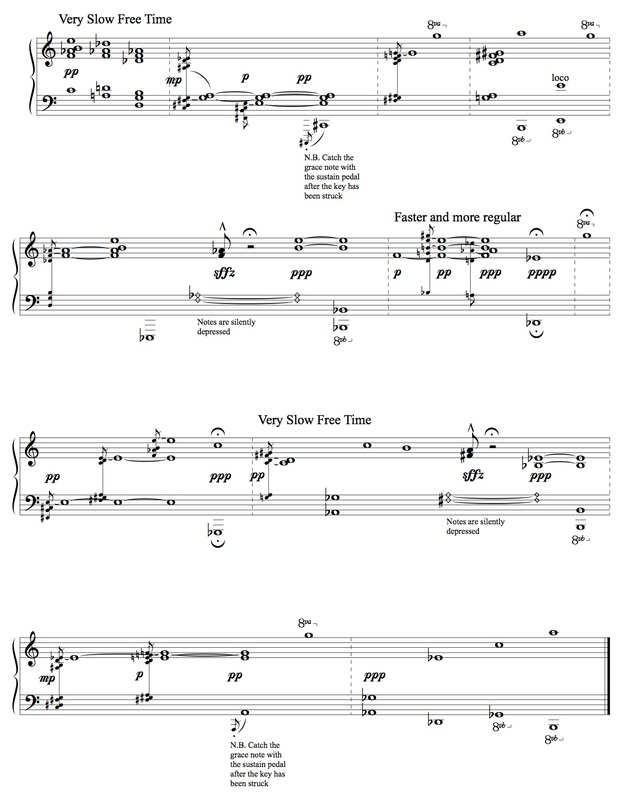 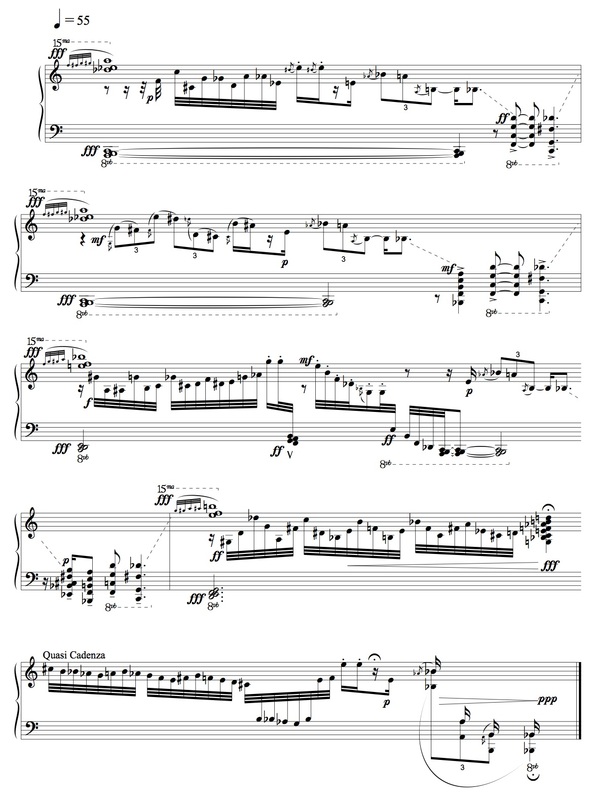 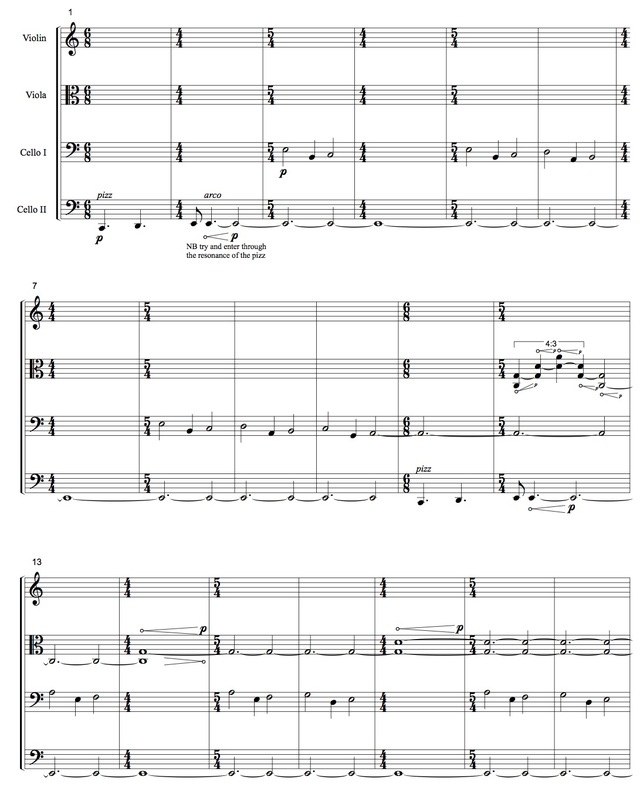 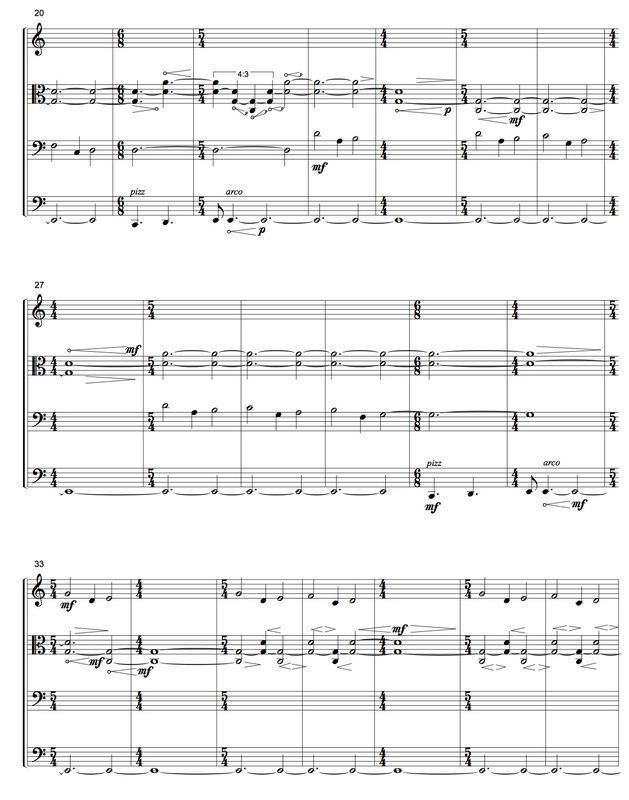 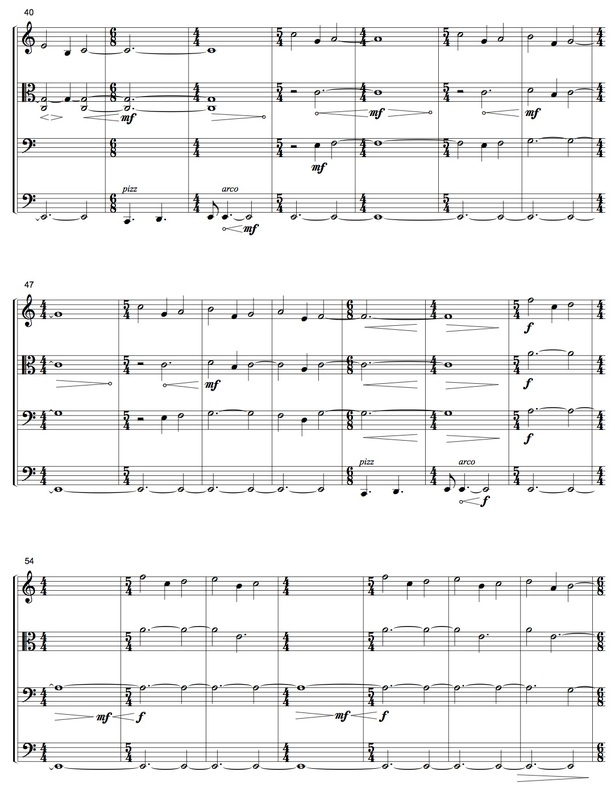 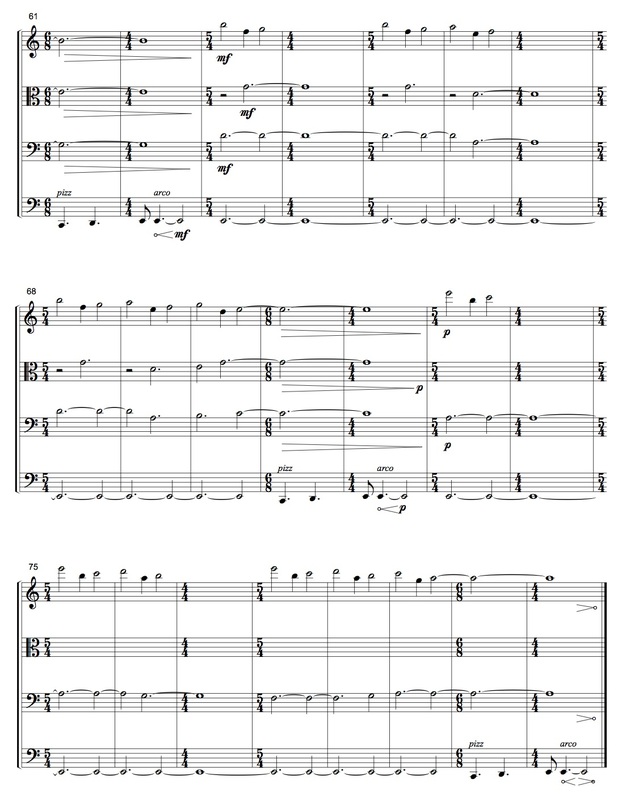 Composition for Solo Trombone and Orchestra (1994)